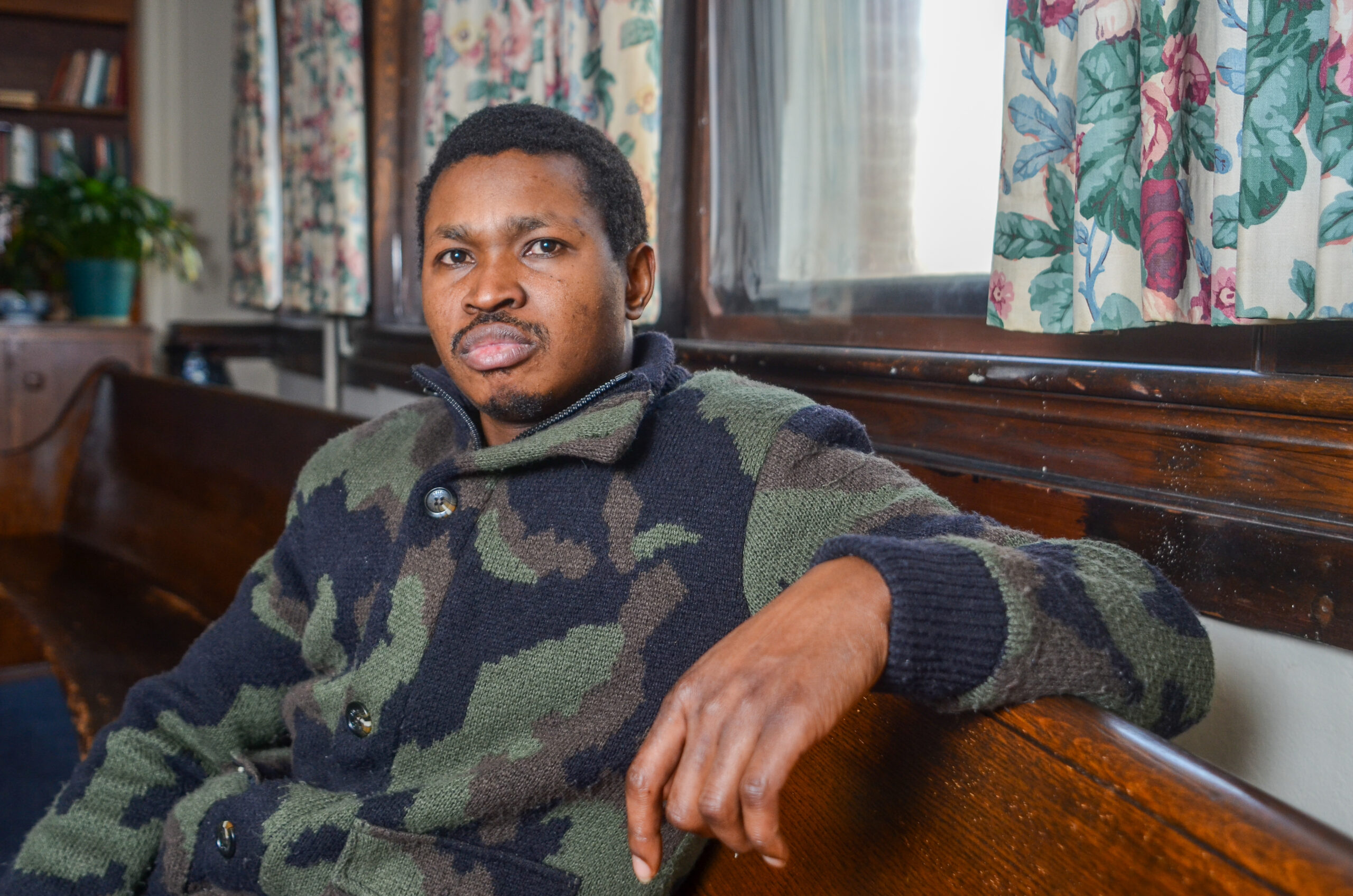 At first glance, Joshua Ruzibuka comes across quiet and soft-spoken. But when he steps behind the altar at the First Baptist Church in New Haven, his voice rises with fervor and he gestures like the Pentecostal preacher he once was. As his sermon moves from English to Swahili and back, his wife, Sandra, stands at his side, translating in both languages.

On the last Sunday of 2018, Ruzibuka filled in at the altar for Rev. Joseph Delahunt, who was away. About half the members of the congregation were, like Ruzibuka, Congolese. A choir of nine sang hymns in Swahili, before Ruzibuka offered prayers for the elections taking place the next day in the Democratic Republic of the Congo (DR Congo.) His sermon included verses from the Book of Exodus and the Book of John, references to Pontius Pilate, and hopes for the new year that was about to begin.

Although he now preaches in a Baptist church, Ruzibuka first ministered in a Pentecostal church in a refugee camp in Malawi. A nine-year odyssey that began in DR Congo when he lost his family to tribal warfare brought him there at the age of 15. In 2013, shortly after his arrival as a refugee in New Haven, he found the First Baptist Church. “I was looking for a way I could worship and keep my faith,” Ruzibuka said. “I was touched by how the pastor preached. The people showed me love. They have love and the Bible asks us to have love.”

Ruzibuka’s then-fiancée, Sandra, joined him at the church. Her sister followed soon after. Now 11 Congolese families comprising more than 50 people worship at the church on Livingston Street in New Haven. Their presence has revitalized a congregation that just a few years ago was on the brink of disbanding, providing a mission and sense of purpose as they sought ways to welcome the new arrivals to America.

“Before Joshua came, we were at a low point. Our congregation was demoralized,” recalled Kingsley Emerson, a retired pastor who is a member of the congregation. The church’s pastor had died, and the congregation had dwindled to about 40 people. “Now we have a vibrant community.”

“This church is going against the stream of older established churches, which tend to be in decline, as this one was,” said Delahunt. “A major reason why we are growing and there is a sense of energy here is because of this work. Other people join this church because of this sense of mission.”

For a time, the congregation considered co-sponsoring a refugee family, but soon members realized they had their hands full with what they were already doing. They also realized they needed help. They contacted Ashley Makar, IRIS’s community liaison. IRIS invited them to the same day-long training they provide to co-sponsors, who work with refugee families over the course of several months to help them settle into life in the United States.

“They wanted to know if they were doing the right things in terms of what services they were providing and how they were doing it,” Makar said. “It seemed like they had organized really well. They were doing great.” For more specific questions, Makar put them in touch with Linda Bronstein, IRIS’s senior case manager, who works with most of the Congolese families who joined First Baptist.

Congregants have organized a slew of services for the refugees, all of whom had been resettled by IRIS. The church offers limited financial support, conversational English, mentoring, help with shopping for groceries and clothes, planning a budget, teaching interview skills, and help with job searches. A physician in the congregation provides pro bono house calls. Every Sunday 18 volunteers drive people to and from church. Sunday school has seen a boom in attendance. With two small grants over the last three years from a benefactor committed to lifting people out of poverty, the church bought winter footwear for all the youngsters in the congregation at Payless on Black Friday. “Payless is already cheap, and everything was half price that day,” Delahunt said.

Ruzibuka has not only shared his new spiritual home with newly arrived Congolese families, but he also preaches there several times a year, on the final Sunday in any month in which Sunday falls five times.

His story begins in the 1990s in DR Congo, where his ethnic Rwandan family lived. The tribal violence between Hutus and Tutsis that first erupted in Rwanda recognized no borders and one night, Joshua, who is Tutsi, hid under a bed when a mob came for his family. He was six years old. He came out from hiding the next morning. “I saw my mom, my dad, my sisters,” Ruzibuka said. “I saw people running. I just followed them. I didn’t know where we were going.”

He followed the crowd to Rwanda, where a man took him in until it became too dangerous. Ruzibuka returned to DR Congo to live with family friends, until the threat of violence forced him move again. He spent a short time in Tanzania before landing at the Dzaleka refugee camp in Malawi, home to 12,000 people. He lived in a shelter made of plastic and subsisted on monthly rations that included a cup of sugar, some salt, a small bucket of maize, and two cups of beans. He had one large can that served as a stove and two others as cooking pots.

He was teaching hymns in Swahili to a church choir when the pastor took him aside. His voice, the pastor told him, was no good for singing, but great for preaching. He apprenticed with the pastor, then formed his own congregation, which grew to 250 people.

Eventually, Ruzibuka had a chance to seek asylum when representatives of the United Nations High Commission on Refugees arrived. After interviews and a lengthy vetting process, Ruzibuka waited to hear whether he’d been accepted to live in another country. Then a letter arrived. “I opened the envelope and it said, ‘Welcome to America.’”

Ruzibuka, now 27, is married to his fiancée, Sandra, who is also from the Congo. They have a 4-year-old son, Eldad Joshua Ruzibuka, and live in New Haven. Sandra is studying nursing at Gateway Community College, and Joshua works as a cook at the Madison Beach Hotel on the Connecticut shoreline.

“God is so amazing. God gave us an opportunity,” Ruzibuka said. “We have everything we need. You are free to do what you can. We are very happy. We enjoy life.”