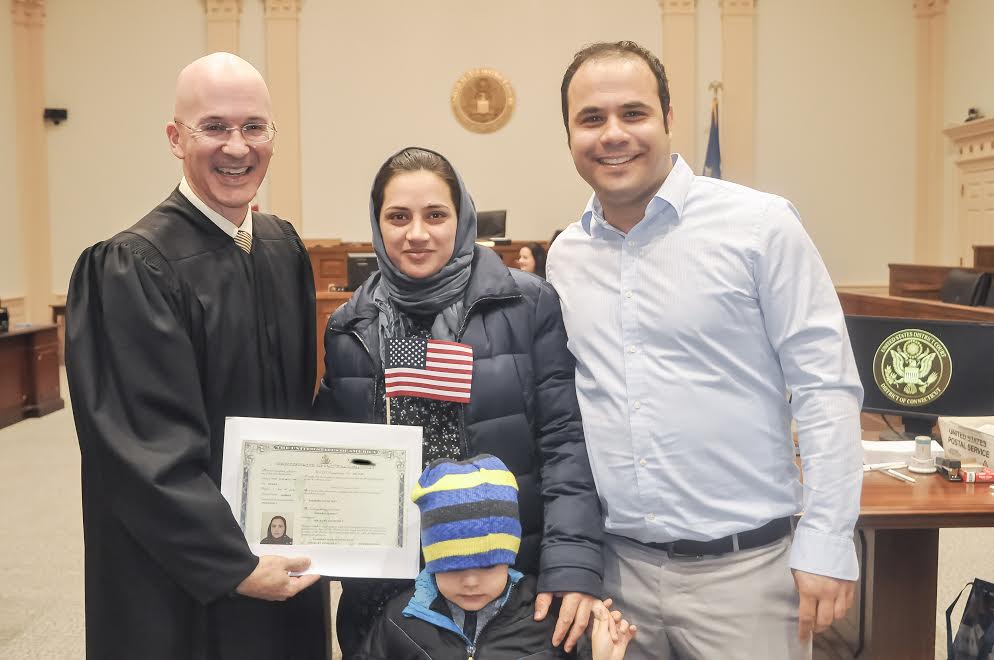 When Fardeen Shahnan was five years old, his family left Afghanistan for a safer haven in neighboring Pakistan. Fifteen years later, after the U.S. invasion routed the Taliban, the family returned to Kabul. Unable to find a job in his field of civil engineering, Shahnan went to work as an interpreter for the U.S. military and military contractors. Because of his work, he accompanied troops on patrol, he began receiving threats.

“We were receiving calls from the Taliban, ‘we are going to kill you,’” Shahnan said. “They had my name, my picture, all my information.”

Based on his work for the military, Shahnan applied for a special immigrant visa. He and his pregnant wife, Spozhmai, came to New Haven in February 2014, where they were resettled by IRIS.

On Nov. 7, Fardeen and Spozhmai became citizens in a naturalization ceremony at the federal courthouse on the New Haven Green.

“I’m feeling good, I’m excited,” Fardeen said after the ceremony. He and Spozhmai were joined by their 3-year-old son Yaqub. Their 5-year-old, Yusuf, was in school. Spozhmai is 37 weeks pregnant with their third son and Fardeen works in a New Haven hotel as an inspector in the housekeeping department.

“It’s great,” he said of the family’s life in New Haven. “People are so welcoming to refugees.”

In his remarks at the ceremony, Judge Robert M. Spector, welcomed the 32 new citizens from 19 countries, advised them of their responsibilities as citizens, and encouraged them to hold on to their heritage and culture.

“Those are the things that make you who you are. We don’t ask you to leave those things at the doorstep,” Spector said. “Your identity is not something you give up when you become a citizen of this country. Don’t ever let anyone tell you that.”