Four Afghan Refugees get a Warm Welcome in West Hartford 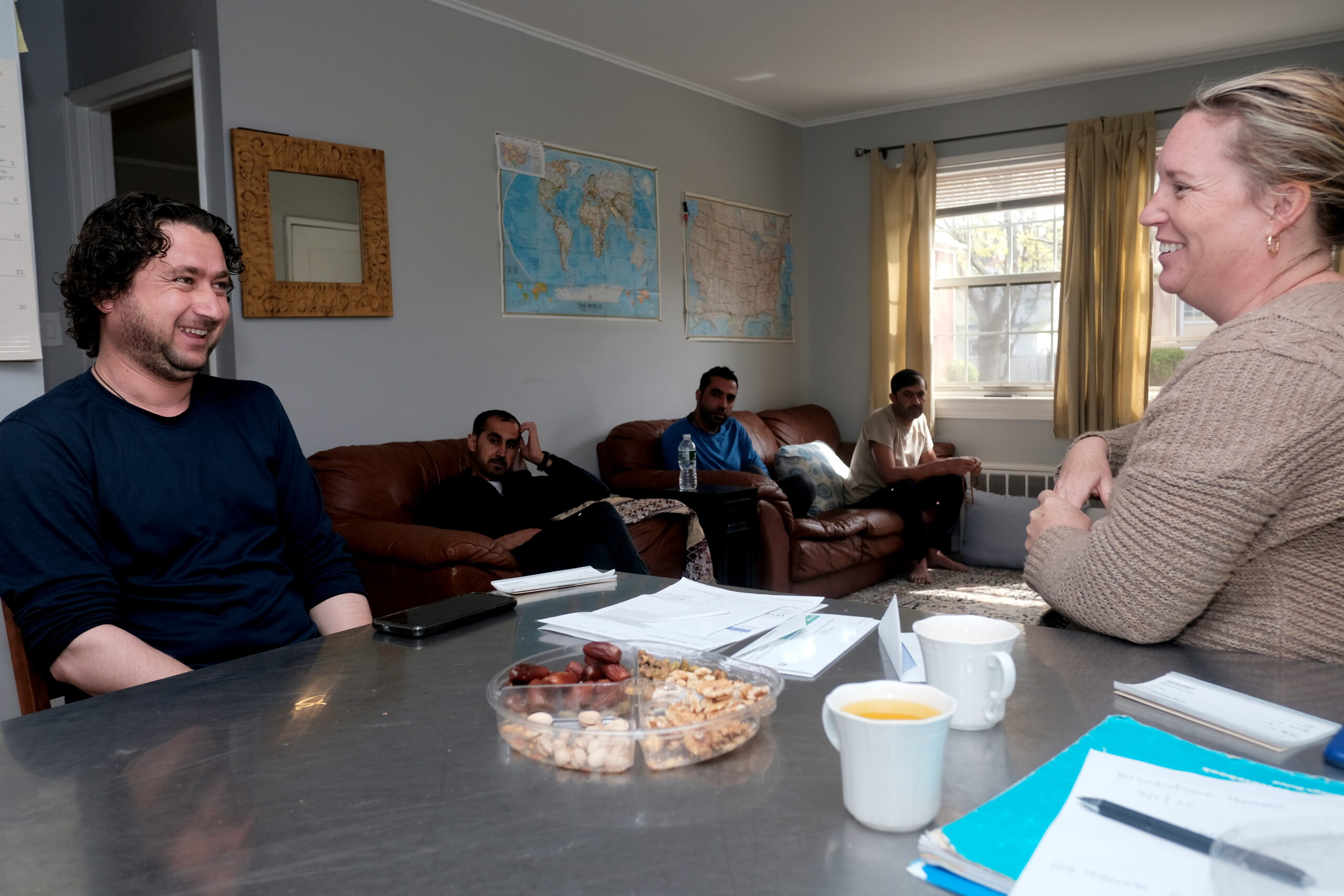 Four Afghan Refugees get a Warm Welcome in West Hartford.

When Sarah Martz talks about “the guys,” she’s referring to four Afghan soldiers who left their country after the fall of Kabul last summer. They now share a two-bedroom apartment in West Hartford and Martz is one of several volunteers who is helping them start new lives in the United States. She visits them three times a week to help them learn the ways of life in this country.

“I always have a list,” Martz said during a visit in early March. “We do money on Wednesday—using ATMs, paying bills. Today I had to get them to sign forms for paperwork to get their families here.”

Martz got involved with their resettlement after answering a call last summer in the Facebook page of her neighborhood, Hartford’s West End. With the withdrawal of U.S. troops from Afghanistan imminent, Carrie Berman, who had helped resettle Syrian refugees during the civil war there, anticipated an even greater need. “She knew that this was going to be bigger than what had happened with the Syrians and that what would be most beneficial would be to get as many co-sponsorship groups as possible together,” Martz said. About 40 people signed up to create West End Welcome and contacted IRIS for guidance on how to get started.

The group formed teams for specific tasks and began raising money and hunting for apartments and furniture. By last November they had $20,000 in hand and had identified two possible apartments. About 80 people are now involved, Martz said, but about 10 are the most active.

Martz saw herself as an overseer and hadn’t planned on the personal role she’s assumed. “I was a stay-at-home mom, coming out of two years of virtual school due to the pandemic,” she recalled. With her two children back at school she was looking for another activity. Then she saw the Facebook post. “I felt like I had time and I’m extremely organized. I love the delegation. I love the chaos. That works well for me.”

For the first three months, Martz and co-chair Jane Carroll took care of email and Facebook posts, serving as co-chair and delegator for West End Welcome as the group waited to welcome its first refugees.

In December, IRIS held a Zoom meeting with its co-sponsorship groups and Martz learned of an urgent need—IRIS had already received 300 people in two months, and more were on the way. Of particular concern was a group of three men, hard to place because they were not the typical nuclear family unit.“That was a Monday night,” Martz said. “We said we’ll take the three men, the men arrived Wednesday, we put them in an Airbnb, and then we signed the leases for two apartments on Friday.” (The second apartment is for a family of three that arrived in April.)

When it came time to pick up the men in New Haven, no one was available, so Martz volunteered. “That changed everything,” she said.

She took them to the Airbnb and went to visit the next day. “We decided then that somebody should be there every day. So, I saw them every day for two weeks. We thought that would build some confidence and some trust. I started bringing my kids.” The household, however, didn’t work out. Two of the men had a falling out with the third, who now lives in an efficiency apartment nearby. After he left, the two were joined by two friends who had shared their odyssey from Kabul to the United States and had resettled in New Jersey where they were not able to get the help they needed from a local resettlement agency that was likely overwhelmed with new arrivals.

The soldiers’ journey to Connecticut started last August after the U.S. withdrawal from Afghanistan. They were based in Khost, near their hometowns on the border with Pakistan, but as the Taliban advanced, their units were called to defend Kabul. The Taliban attacked their convoys, and they reached the capital only after disguising themselves as civilians. “The Taliban were controlling roads with blockades and checkpoints, stopping and asking questions. What are you doing? Where are you going?” said N., a 30-year-old commander. (For the safety of the soldiers and their families in Afghanistan, only initials are used). When Kabul fell, U.S. military advisors took them into the airport and helped them leave the country. “The Taliban was outside at the gates of the airport,” said N. They traveled first to Tajikistan, then Germany, then a military base near Washington, DC, before continuing to bases in Texas and New Mexico.

They left Afghanistan with no more than the clothes on their backs and without being able to say goodbye to their families, but they now have a furnished apartment, new clothes including winter coats and boots, and all four work the evening shift at a bulk mail processing facility a mile away. That leaves their days free for taking care of the tasks of settling in, like English classes and required medical visits. They live within walking distance of a Walmart and a CVS but need rides to New Britain for Friday afternoon prayers at the nearest mosque. West End Welcome has provided them with Uber gift cards, and showing them how to use the cards has been another learning experience. Another lesson is to encourage them to do chores like grocery shopping and laundry separately, to build independence.

“Martz’s visits have become more than an opportunity to take care of business. Martz talks about “the guys” like they’re family. Her 8-year-old daughter and 10-year-old son, who often come along, see the soldiers as uncles. During a visit in December to hang curtains, Martz realized she’d need to make a run to Home Depot. “My daughter said, ‘I want to stay, I want to stay, I’ll teach them English.’” Her children have another reason to enjoy their visits—volunteers often ply the soldiers with donations of food that isn’t halal. “They would send all of this junk home with my kids, the cookies, the donuts, the sweets they don’t eat,” Martz said. 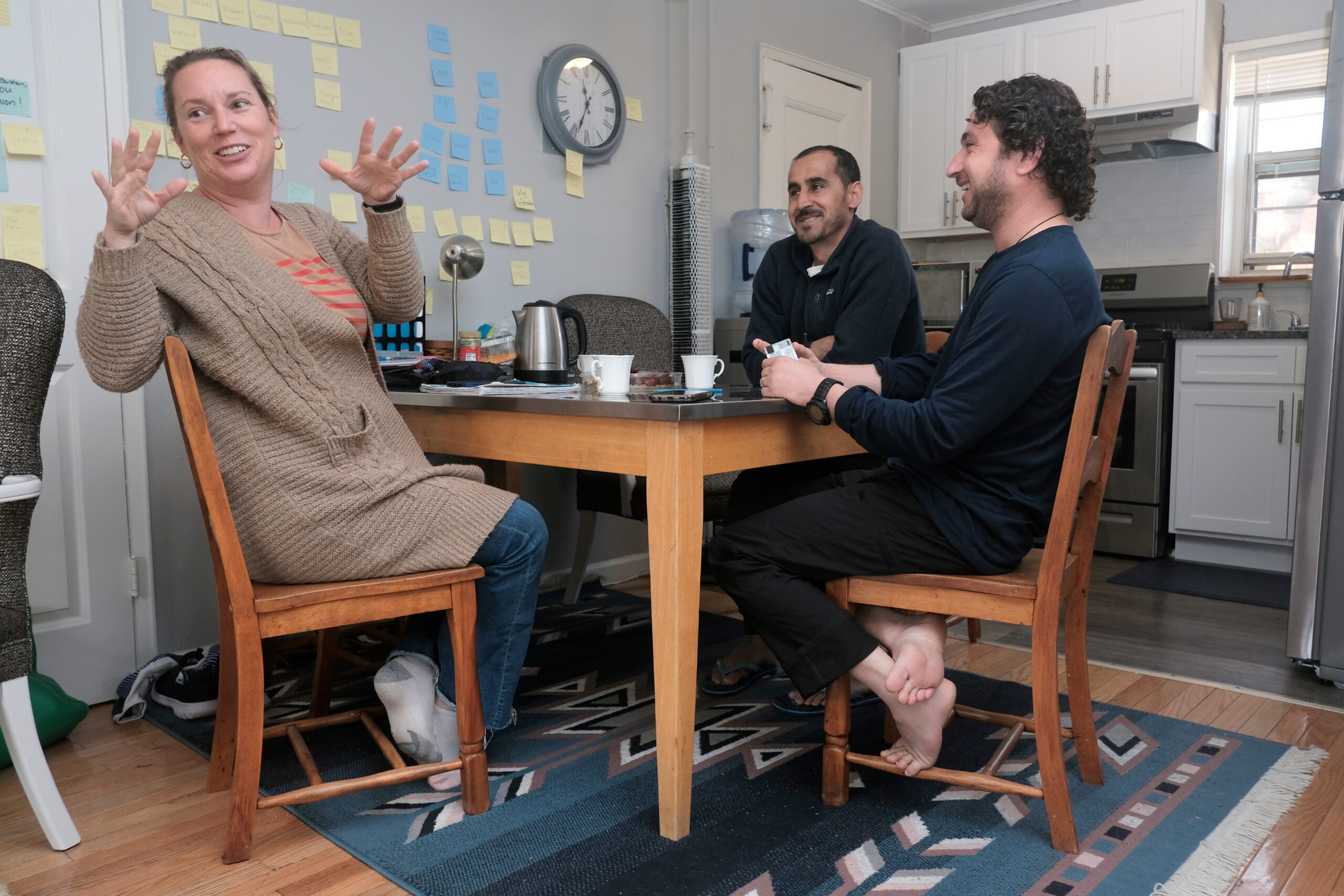 When Martz asked the men if they felt any discomfort at being driven around by a woman or having a woman not a family member visit them alone, they reassured her. “They said, ‘We see you as our mothers and our sisters. And our mothers in Afghanistan are so thankful.’”

“When Sarah is coming here everyone is very happy,” said N. Martz has found that there’s no such thing as a quick visit. “You walk in the door, and they offer you tea and nuts and dates,” she said. An invitation to share a meal soon follows. “You go for a 30-minute event and you’re staying for an hour and a half. You’re sitting on the floor, having Afghan food. If you say no, I can’t stay, there’s this look of bewilderment.”

Indeed, when two visitors from IRIS arrived in early March, the men offered saffron tea and a tasty chickpea and kidney bean stew cooked with onions, tomatoes, and okra, and served with rice and flatbread.

The apartment walls are adorned with pictures and phone numbers of the five women who have taken on most of the resettlement responsibilities. On the living room wall are maps of the world and the United States. Post-its on walls around the apartment include common English phrases they’ll need to learn.

N, the former Army commander, is the only English speaker and serves as the interpreter for the others. Their main concerns are to send money to their families in Afghanistan and to find a way to bring them to the United States. In daily calls to their families, they’ve learned that the Taliban has been hunting them for their association with the Afghan army and the U.S. military. “The life is very dangerous. The life is not safe for us and for our families,” N said.

Days earlier one of the men learned that the Taliban had come looking for him and taken his 19-year-old son instead. He was released after the family paid a ransom. Their relatives can’t work because fear of the Taliban keeps them confined to family compounds, so the soldiers send remittances to their families from Connecticut.

Among them, the four men have 25 children, and bringing them and their extended families here is their prime concern along with building a life here. B, 37, who has five children, hopes to become a truck driver. R, 32, also the father of five, would like to work as a car mechanic, which was his job in the Afghan army. H, 35, has 10 children and wants to provide an education for them. N, as the oldest brother in his family and the father of five, feels a responsibility to his family and says, “I will try to find a nice job.”

Martz and her colleagues will continue working with them to get them acclimated to life in the United States. Independence and self-sufficiency are the goals. “We’re all here to help get you out of the nest,” Martz tells them. “This is our opportunity to help you. You fought with our soldiers for 10 years. Now you are here, and it is our job to give you rest and treat you with kindness.”