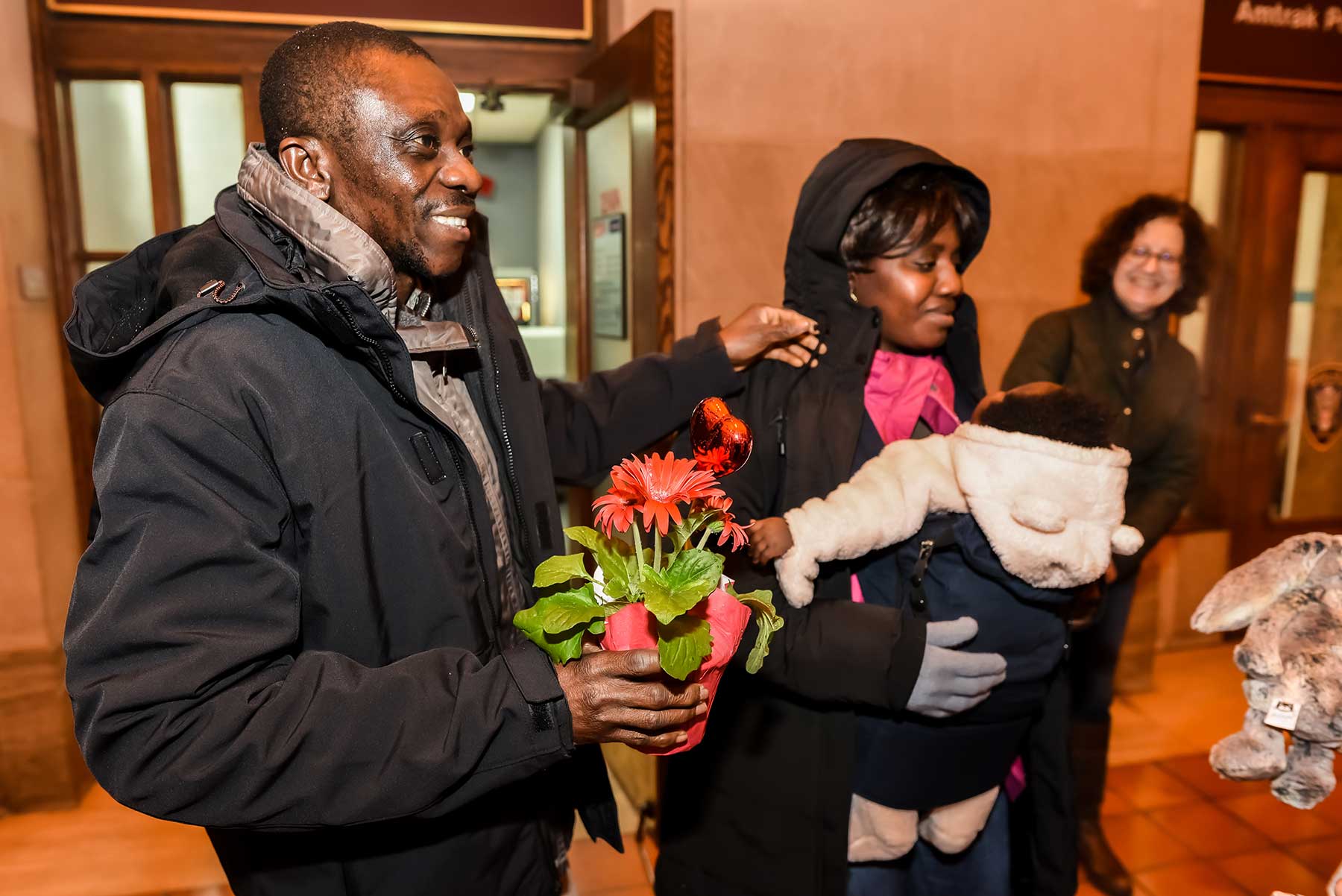 On the evening of February 7, a flurry of snow greeted a Greyhound bus as it pulled into the station on Union Avenue in New Haven. The arrival marked the end of a 53-hour ride from McAllen, Tex., and, for two families on board, an odyssey that started years earlier in Angola and the Democratic Republic of Congo. Their journeys brought them to Brazil, then to South America’s northern reaches, across the deadly Darién Gap, and up through Central America and Mexico to the U.S. border.

At the bus station, staff from IRIS and members of two co-sponsorship groups welcomed the families and took them to their new homes In New Haven and Madison. Both families are seeking asylum in the United States and have received temporary parole to stay in the country while their applications are processed.

The arrival of the asylum-seekers presents a departure for both IRIS and its co-sponsors. In the past they’ve received refugees who arrive with their immigration status settled and government support provided until they land on their feet. Unlike refugees, asylum seekers are not immediately authorized to work, leaving them financially dependent on their co-sponsors and IRIS for a year or longer. IRIS has helped asylum seekers already in New Haven by offering them case management services, but this was the first time they’d be co-sponsoring them.

In late December, IRIS received word that Catholic Charities needed help with an influx of African families at the border. In their shelters, the charities had many asylum-seekers who had no place to go.

“We responded immediately that we will take five families,” said Chris George, director of IRIS. He arrived at that number, he said, “based on a combination of factors; our capacity, what is it going to cost, how many community groups do I think can help us out, and what amount of families would have a significant impact? IRIS has more resources in terms of community support and private funding than most refugee resettlement agencies. I felt that this would be a good way to use these resources.”

IRIS remains willing to accept up to five families, but as of now,  Catholic Charities has needed to place only two. On February 2, Alexine Casanova, IRIS Director of Case Management, flew to Texas to meet the families, explain the co-sponsorship process, and arrange travel to New Haven. Because plans were made on short notice, it was too expensive to buy one-way air fares, so they all came by bus, with Casanova — a fluent French speaker —  joining them on the trip through the South to Atlanta and up the East Coast to New Haven.

Before Casanova left for Texas, IRIS had reached out to its community co-sponsors. George cautioned that although this would be similar to refugee resettlement—they’d still have to find and furnish an apartment, provide interpreters and cultural orientation, and introduce them to available services—the co-sponsors would also need to support them for a year or longer.

“Employment authorization is a huge difference between asylum seekers and refugees,” George said. “They are not eligible for cash assistance, food stamps, and health care insurance. We can find places that provide free health care and we can connect them to food pantries, but who’s going to pay their rent and cover their utilities and all the other expenses? All that has to come from either IRIS or a community group.”

The Jewish Community Alliance for Refugee Resettlement (JCARR) in New Haven and the First Congregational Church in Madison offered to take in the families. The Angolan family, father, mother, and three daughters would stay in New Haven with support from JCARR. The Congolese family, parents and a baby girl, are in Madison.

Both groups have volunteer networks that include retirees, as well as such professionals as physicians, social workers, financial planners, and teachers who can offer their services.

Jean Silk, who leads JCARR, said the decision to accept a family was made quickly, but required consent of higher authorities at its five member synagogues and the Jewish Federation. Despite concerns over the financial commitment, JCARR, which has co-sponsored four refugee families, agreed to take in the Angolan family, who fled religious persecution at home.

“There wasn’t a soul in the group who said no,” Silk said. “We have to. The Torah says 36 times that we shall welcome the stranger because we were once the strangers.”

The family has settled into an apartment in New Haven’s Hill neighborhood. Their oldest daughter, who is seven, has enrolled in kindergarten in a public school and her parents are eager to learn English.

The church in Madison took in the family who left a Congo wracked by rebel attacks. About 10 years ago, said Todd Vetter, senior minister, the church co-sponsored a refugee family from Iraq and last year went through training with IRIS to accept another family.

The Congolese family is living in a vacant in-law apartment while the church seeks a more permanent place in nearby Branford. Branford, Vetter said, is more suitable for its access to public transportation and the town’s programs in education and English as a Second Language.

“We were emotionally invested in helping someone and it didn’t matter whether they were a refugee family or an asylum-seeking family. The lack of access to public assistance and the ineligibility to work add a layer of complexity we’re still working through,” Vetter said. The church board approved the decision and a core group of volunteers prepared to receive the family. “There was universal approval and extraordinary enthusiasm for it. Every now and then, churches need to renew that sense of why we’re here and what it means to be a church.”