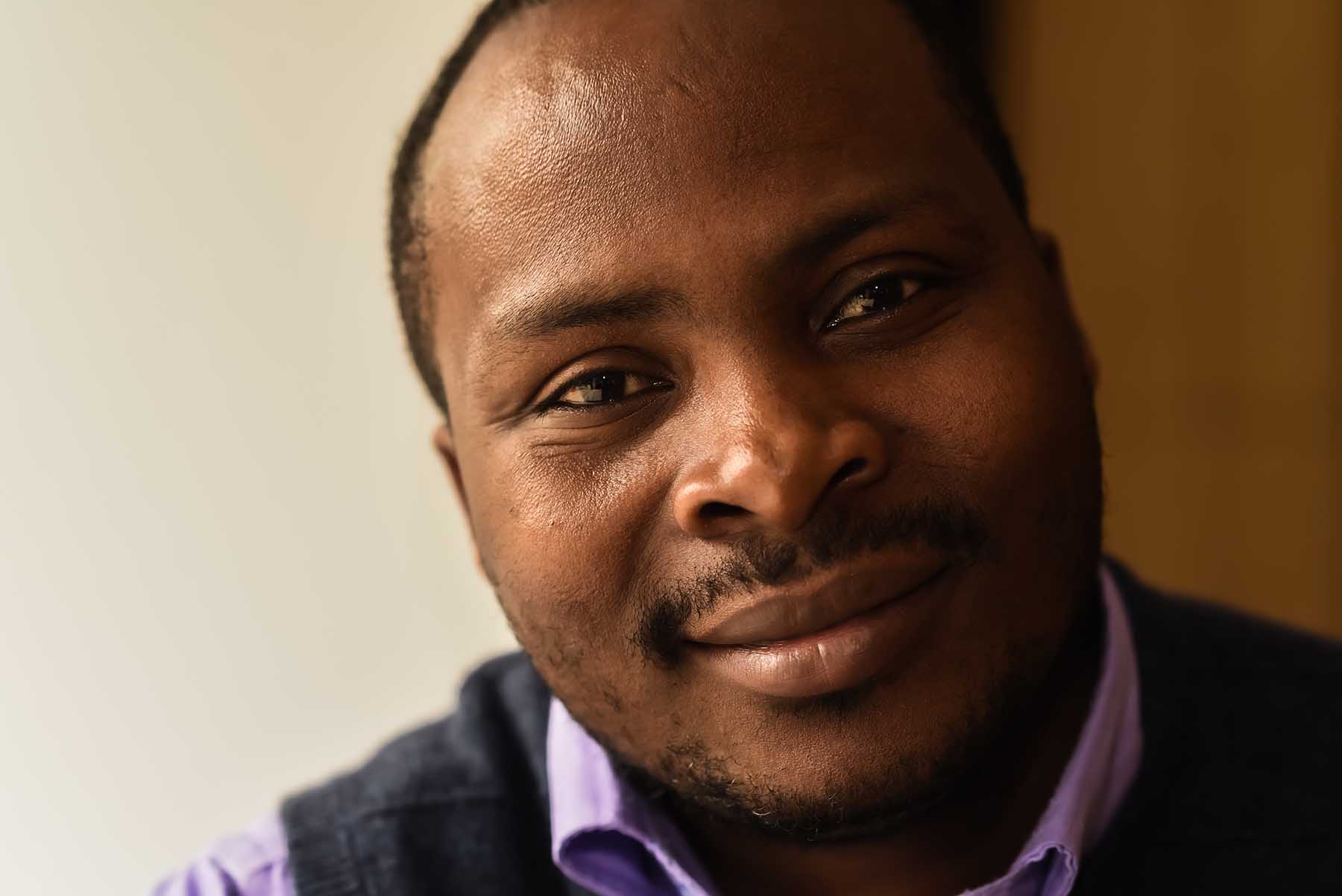 Bahati Kanyamanza started organizing young people as a refugee at a camp in Uganda. Now he’s applying the lessons learned to youth in New Haven.

On a recent Wednesday afternoon, Bahati Kanyamanza sat in the cafeteria at the New Haven Free Public Library on Elm Street with IRIS staff and students from the Yale Refugee Project.

It was a weekly meeting to plan for IRIS youth programs the Yale students run for high school students, and Kanyamanza was there to learn about the program and the people involved. He started on January 29 as manager of IRIS youth programs and education advocacy and he’s still listening and learning about IRIS and the New Haven immigrant and refugee community. He’s visited IRIS programs and schools the students attend and has spoken at New Haven schools about refugees and immigration.

“One thing I’ve realized through the work I’ve been doing is that young people don’t know or appreciate the opportunities they have here, compared to young people around the world,” he said. “One of the things I want to emphasize is creating a program where young people learn as much as possible to benefit from all these opportunities around them.”

Kanyamanza has been organizing young people since 2005, when he was living in a refugee camp in Uganda and he and his friends wanted to do something about the forced and early marriages, prostitution, and drug use, as well as lack of access to education, that they saw around them.

“When we realized this was happening in 2005, we said we’re going to mobilize the young people to do productive work like farming, co-curricular activities, and sports,” he said.

They enlisted young people to help older camp residents with farming and household chores. They secured a plot of land from the government and started a primary school. In a nearby town they found a cheap house that they converted into a dormitory so students from the camp could attend high school. “We felt that education was the only way that would help us solve our problems in the future,” he said.

Kanyamanza finished high school in 2006 and went on to get a college degree, then a law degree while living in the camp. In 2016, after a six-year process, he came to the United States as a refugee with his wife and daughter.

He grew up in the town of Jomba in the Democratic Republic of Congo. His family—he was the oldest of nine children—were subsistence farmers, growing bananas, potatoes, yams, peas, sugar cane, and sorghum to make beer. Anything left over, they sold to pay for school and clothing.

In 1996 rebels raided his village in the Democratic Republic of Congo, taking him captive and forcing him and other boys to haul away stolen food. Until he escaped three months later, his captors required him to do domestic chores, like washing their clothes. He was shot during his escape and at a clinic met a woman who took him in, until her village was attacked. For the next three years, he wandered from village to village, moving on after each rebel attack until he landed in the Kyangwali camp in Uganda in 1999. There he reunited with his father, who took care of him until his death in 2006. He wouldn’t see his mother and siblings for another 15 years.

In the United States, Kanyamanza and his young family settled in Elizabeth, N.J., until he enrolled in a program in sustainable development at the School for International Training in Brattleboro, Vermont. He received his master’s degree in 2019 and took a job at a Boys & Girls Club in Dallas, Texas, before coming to IRIS.

At IRIS, he replaces Dennis Wilson, who’ll be transitioning to Director of Education.

“One of the clearly outstanding things about Bahati is the work he has done with youth and education,” Wilson said. “When he was a refugee in Uganda, Bahati was essentially running an NGO that supported and educated other youth who were in the camps.”

Along with encouraging immigrant and refugee youths to take advantage of opportunities in New Haven, Kanyamanza has another goal, character development.

“Having worked with young people for 15 years, I see our communities can prosper if you have the right leaders,” he said. “These are the future leaders we are working with. My belief is that the better we prepare them, the better the society ahead of us.”